Sadako Sasaki was a Girl from Japan who apperently survived the dropping of the A-Bomb over Hiroshima unharmed. But when she turned twelve it became obvious that she had leukemia as an aftermath of the A-bomb. As she was in hospital friends visited her and one of them folded an Origami Crane for her telling her the story of the 1000 cranes that grand you a wish. Hoping for cure she began to fold. At this point stories begin to vary some say  she made it and continued as  nothing happen after 1000 others say she died before 700 were made and her friends finished 1000 for her funeral, nevertheless Sadako never gave up the hope. Since then then crane and sadako becam a symbol of hope and peace. 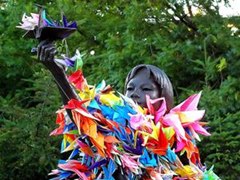 Want to master Microsoft Excel and take your work-from-home job prospects to the next level? Jump-start your career with our Premium A-to-Z Microsoft Excel Training Bundle from the new Gadget Hacks Shop and get lifetime access to more than 40 hours of Basic to Advanced instruction on functions, formula, tools, and more.

I don't know wich of the two you're refering two but, both can be found on flickr. The lower one is a picture of the memorial in Seattle Peace Park , you can find loads of pictures of that statue on the web